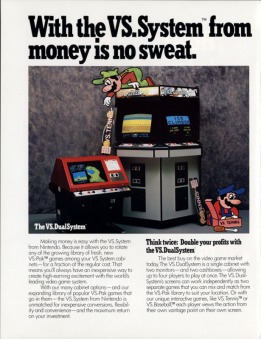 By 1984, Nintendo was taking off as a gaming company after the release of a handful of successful arcade games including Donkey Kong and Mario Bros. Eventually, they would release the Nintendo NES the following year.

As part of their success in the arcade arena, Nintendo came out with the Vs. System. It was an arcade system that was setup to play a library of games that included mainly arcade versions of games that would eventually release on the NES console.

This site is dedicated to the sit-down version of the Vs. DualSystem. Among collectors and enthusiasts, it is referred to as The Red Tent for obvious reasons. It is definitely a unique and versatile arcade machine. Some consider it a cocktail, Nintendo referred to as a "sit-down," and others compare it to the candy cabinet style Japanese arcade machines. We hope this site will serve as a fun and valuable resource for those that support the preservation of this awesome piece of Nintendo and arcade gaming history.